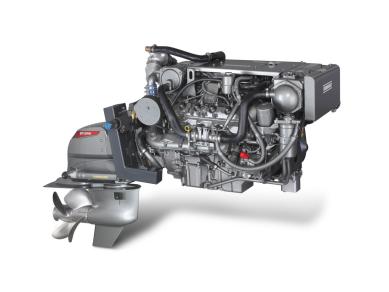 Yanmar has developed a new 4.46 litre twin-turbo V8 diesel engine, coupled to a sterndrive or gearbox. The 8LV will be offered at 320 mhp (235 kW) and 370 mhp (272 kW). The engine is EPA Tier 3 compliant. It will be shown to the public for the first time at the 2011 Düsseldorf Boat Show.
The compact 8LV diesel can be installed in single or twin configration, with the new, hydrodynamic Yanmar ZT370 dual propeller sterndrive or KMH50 series transmission, down angle or V-drive.
It has a twin turbocharger and common rail fuel injection for superior performance in terms of fuel economics and acceleration. There are four valves per cylinder. In the Yanmar tradition of high power from low weight, dry engine weight is just 450 kg.
This is the first engine to use Yanmar’s own, newly developed CAN-bus vessel control system, the Yanmar VCS. It can be ordered with the new joystick, facilitating 360º turn, sideways and diagonal movement.
A key feature of the high torque 8LV is its wide power band. It idles at 550 rpm, capable of crawling speed in the marina, aided further by a hydraulic clutch, with both sterndrive and gear configrations. Maximum engine speed is 3,800 rpm – well ahead of other engines in this segment.
Further benefits are exceptionally low noise levels and minimised vibration, ease of installation and servicing, and the advantage of a powerful 12V / 180A alternator.
The 8LV is expected to attract a wide variety of boat builders producing craft up to 45-feet (14 metres) for applications ranging from water skiing to cruising. Additionally, the engine will be used for repowering, offering the advantages of diesel over similar-sized V8 gasolene units.