Classic Wooden Yachts from the The Yacht Manufactury Robbe & Berking 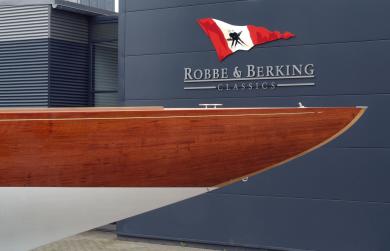 The Yacht Manufactury Robbe & Berking will exhibit at the „boot 2012“ in Düseldorf in Hall 6, Stand 6C42.
On the boatshow-stand, two elegant wooden yachts will capture the imagination of the visitor, an invitation to dream of the bygone eras of grand yachting. While, at the yard in Flensburg, the first new build of a classic 12-metre yacht since more than 50 years is underway for a Danish owner, the visitors of the BOOT in Düsseldorf can inspect the first production boat of the yard, the 30-foot Robbe & Berking Commuter. This motoryacht is built from mahogany and its lines look just like those of the great American Commuter Yachts from the 1920s. In different versions, this boat can be used as a Taxi-boat, a Superyacht-tender, or simply as probably the most elegant of all picnic-boats.

Directly alongside, the other mahogany yacht is the 6-metre racing yacht “Apache”, the only authorized replica of the 1939 designed yacht of the same name, by Norwegian yacht designer Bjarne Aas, which sank decades ago after a collision. Films and books from the great times of yachting add to the flavour of the stand, turning it into a refreshing change in the midst of the many series production yachts on show.