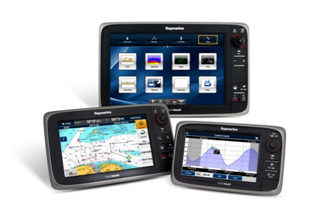 Dusseldorf Boat Show is the venue for the world launch of Raymarine’s new mid and large format e series multifunctional displays. Taking place on Raymarine Deutschland Gmbh stand 11A42, these new e95 and e125 multifunction displays (MFD) follow on from the tremendous acclaim received by the compact e7. The two larger screen options have been eagerly awaited by Raymarine users, looking to enjoy the advanced power, expanded networking, and wireless connectivity of the HybridTouch™ e series, whose technical innovation and intuitive access to information and on-board system control has caught the imagination of boat owners. The two new screen sizes are also set to be available in a non-touch screen display; all the connectivity via button control heralding the new c series.

The new e and c series take networking and integration to new levels, util ising the full power and capability of WiFi and Bluetooth connectivity. The e7 was the world’s first 7” (17.78cm) MFD to provide networking with up to six displays plus accessories. With the new Raymarine Viewer App, e and c series are able to stream live video direct to Apple iPad (1&2) and iPhone (4 and above) in real time. Simply put, with built-in WiFi connectivity the e and c series screen display, whether showing navigation charts, thermal video, radar or sonar information, can be accessed from absolutely anywhere on-board via mobile iOS devices.

Thanks to Bluetooth connectivity the user has the ability to control the e and c series via an optional remote control unit – the RCU-3, which can be mounted on a boat’s steering wheel or used as an independent handheld device. Range in, range out, mark a waypoint, the RCU-3 remote controller gives access to frequently used functions whilst underway. The RCU-3 also eliminates the need to expose mp3 devices to the elements, controlling audio playback remotely so that mp3 players can remain stowed away safely.

Raymarine has developed a new user interface called Lighthouse, which brings familiar touchscreen navigation and customisation options together. This results in a highly intuitive and logical system that is both visually appealing and easy to navigate. Users are able to customise their e and c series easily and simply and navigation charts can be configured incredibly quickly.

Designed by mariners for mariners, the e and c series have super-bright LCD displays backlit with LEDs to improve overall power efficiency and provide maximum linear brightness control. The displays are transflective, further enhanced by a choice of colour palettes which allow for optimum use of available sunlight; saving even more power and energy. Displays also offer clear and consistent colour and contrast levels, even with changes to the viewing angle.

There are also e and c series specifically adapted for fishermen, incorporating built-in Clear Pulse sonar, targeting fish and depicting bottom contours and structure with amazing clarity. The e and c series can also be connected to thru-hull or in-hull transom transducers. e and c series have a 50 channel, high sensitivity internal GPS and are available with Navionics ready-to-navigate coastal or inland charts supplied on microSD cards.

For boat owners looking to upgrade to the new e and c series from C or E Classic or Wide displays, Raymarine has come up with a set of bezels and adaptor plates to make the dash/bulkhead install quick and easy; remove the older display, fit the appropriate adaptor plate (no need to drill new holes or make a new cut out), drop in the new e or c series, fit the mounting screws to the pre-drilled holes and clip on the new adaptor bezel. A neat and stylish way to upgrade with no need to change your dash or display mount.