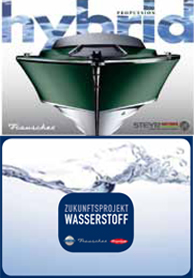 UIM, the world governing party for all Powerboating activities, has bestowed the
prestigious Environmental Award for the second time. The Frauscher shipyard
with his excellent innovations for eco-friendly propulsion systems is one of the winners. The comparably small shipyard takes a leading position in international innovations.
In the year 2009 UIM (Union Internationale Motonautique) has launched the UIM
Environmental Award. The main objective for this prize is to inspire manufacturers
of powerboats to push the development of eco-friendly technologies. Constant
innovation is a key success factor of the company, who calls itself a traditionally
innovative boat builder for more than 80 years.
UIM honors Frauscher with a Special Mention for the development of the world’s
first serial hybrid propulsion and the first emission-free fuel-cell propulsion for powerboats. The hybrid propulsion was presented to the global public in 2008, followed by the introduction of the Future Project Hydrogen, the next world novelty
in pleasure craft propulsion, in 2009. Further developments in electric propulsion
with the goal of reducing energy consumption and increase the range of
electric boats at the same time lead to the first nomination of an electric yacht, the Frauscher 650 Alassio, for the European Powerboat of the Year Award in
2011.
The award ceremony will be held at the annual UIM Awards Giving Gala with more than 400 VIP guests from 25 different nations on Saturday, February 11th
2012 at Salle des Etoiles in Monaco.