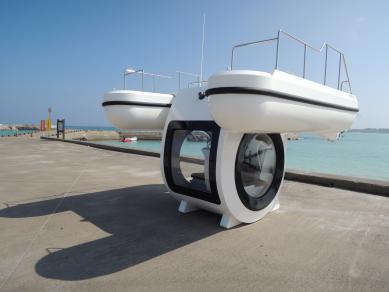 EGO introduces EGO SE 2013 edition
EGO Inc. just introduce the 2013 edition in its EGO SE series, EGO SE 450. The new EGO SE 450 embodies everything good about the old Ego, but this time round, there is a vast improvement in all the vessel is and does. Having been through several levels of modifications and upgrades, Ego se is as good as it gets.

More safety and more convenience
The EGO SE 450 – commercially available for leasing – comes with an upgraded propulsion system and has more powerful electric thrusters, which vastly improves running time and thrust. She runs for a minimum 5 hrs and maximum 8 hrs at a proper cruising speed up to 4 knots; all while delivering even better battery life. The thrusters can be moved up and down according to whether Ego runs or not; fold/unfold. When not in use, they are recommended to be folded up into the thruster house of floating hulls. By doing so, this would reduce the effect of corrosion in the water.

This new drives makes it even easier to use the EGO with much more maneuverability. With a new joystick control for steering the vessel, its child’s play. A remote control has also been added, this way the EGO can be steered from above the surface, making it more accessible for docking and getting to awkward spots. Embarkation and disembarkation has just been made simple using this. This on-deck steering might appeal to many potential owners who operate a rental business in marinas, resorts, and hotels.

The Ego is now safer than ever, with safety standards conforming to CE requirements, e.g., the handrail floating deck gets higher than the old one, and bilge pump is installed on the backside of the swimming platform. The stability is also officially proven and is CE (IMCI) certified. This multihull displaces 4 tons yet retains high stability, comfortably accommodating a party of 4 or 5 passengers.

There is no longer a need to worry about what is happening above the surface (although there are still the old style cameras and displays in the cabin). The scenes captured by the high resolution camera mounted onto the cabin front are transmitted to the LCD screen inside the helm station, which lets the pilot know exactly where he is and what is surrounding them. It helps him/her to figure out, where to go and what is nearby the EGO. The new, failsafe electrical system will always get you home. All the electronics have now been upgraded and waterproofed; this ensures there will be no mishaps.

The interior is much the same layout as before, only this time, the command centre console has been made smaller to give a better view, and this is largely because of the joystick steering method. The seats have also been made more comfortable using upgraded materials. There is also the usual safety equipment inside the cabin for emergencies, a fire extinguisher, vhf radio, and depth finder. The depth finder will help you to avoid a collision when you go toward a shallow area or obstacles like a rock by alerting you with an alarm. With all the old safety equipment installed as standard, this makes for the safest EGO ever built.

With a prestigious 2012 RED DOT DESIGN AWARD to its credit, the all new EGO has been recognized as achievement of a balance between style and function. Now, EGO’s in-house team is under way designing the next version the EGO LE, which is scheduled to launch in 2013. EGO LE will be semi - custom to suit the client.

The EGO Gives hours of pleasure, there is no doubt that EGO is the king of the underwater environment. EGO exemplifies the people's dream to connect with the ocean environment, allowing the passengers to be at one with the underwater life. The EGO benefits from large windows and great views of the underwater ecosystem. Everything about the new EGO has been designed listening to feedback from customers and users, there is no doubt that this all new vessel has been put together for customer satisfaction and even more ease of use.

Availability
In order to provide a uniformity of services and support, the EGO has been distributed throughout the world with exclusively appointed dealer in each country. Those who are interested in EGO purchase or dealership can ask EGO sales department through the website www.egosubmarine.comor facebook pagewww.facebook.com/EGOsubmarines.

Upcoming Event; BOOT 2013 in Dusseldorf
This coming January, EGO Inc. will be showcasing EGO SE 450 scaled model at 2013 Düsseldorf boat show in Germany. This is the first time for a presence in a European Boat Show, which will be a great milestone for EGO in terms of its aggressive targeting to expand into the European Market. To help visitors’ fully understand its application and use, various video clips featuring EGO SE 450’s performance will be shown throughout the show. EGO team is looking forward to meeting prospective partners in Europe.