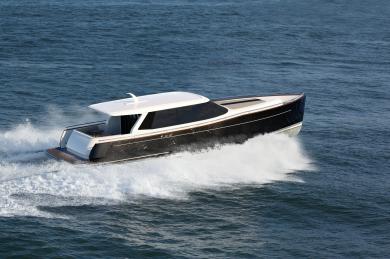 BOOT Düsseldorf 2013 will see Contest Yachts reach another major milestone in an illustrious history spanning more than five decades. The renowned Dutch yard will give a global premiere to its first ever motoryacht, the Contest 52MC, which synthesises the lines and detailing of a sailing yacht with the speed and comfort of a luxurious powerboat.

Having made its name over the past half-century for a global fleet of sailing yachts, Contest’s decision to extend its core values of quality, comfort, performance and design into the motoryacht world came in response to longstanding market requests. “The owners of the first Contest 52MC had actually approached us a number of years ago and they were not the only potential clients that we had to disappoint at that time,” says Arjen Conijn, managing director of Contest Yachts.

“No one likes to turn business down but we were determined to wait until everything was in place before embarking on such a radically different path. And it gives us real pleasure that we were able to reward the patience of the owners of the first Contest motoryacht, who have been intrinsically involved in the project and given a great deal of valuable input. They’ve told us that it was worth the wait and I am confident that the visitors to BOOT Düsseldorf in January will agree.”

Created in partnership with designer Georg Nissen and Vripack Naval Architects, the Contest 52MC will appeal to both former sailyacht owners and committed motoryacht fans. The starting points were Contest Yachts’ core values of quality, comfort performance and design. As standard the motoryacht is fitted with two quiet Cummins Common Rail engines, synchronised with the bow and stern thrusters via an Integrated Docking® system for easy manoeuvring. While the owners of the first model have opted for the largest Cummins available, the yard is also offering a hybrid model with two electric motors offering silent propulsion.

Among the high-tech options that have been fitted onboard the first Contest 52MC is a Seakeeper gyrostabiliser, which will further complement the performance of her modern semi displacement hull. During sea trials the yacht has already exceeded the expectations with a very impressive performance. The Contest 52MC is CE-A certified and meets all the requirements for long journeys on inland waterways, coastal areas and the open seas.

Characterised by peaceful, modern lines, the interior from the boards of Wetzels Brown Partners fully reflects the sailing mind-set in terms of practicality, elegance and refinement.