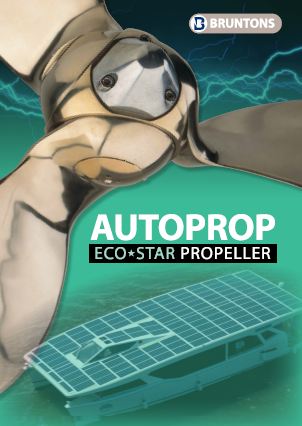 After three years of research and development Bruntons Propellers are launching the Autoprop Eco*Star propeller. It has been developed specifically for hybrid and solar powered vessels but is also providing remarkable improvements in economy and performance on displacement craft powered by diesel engines.
The company’s standard Autoprop is already in use on many electrically powered craft around the world and has been for several years; the result of naval architects and boat builders recognising that the propellers unique auto pitching abilities were exactly what was required on such vessels.
The further development of Autoprop to Eco*Star ‘status’ has been accelerated by Bruntons participation in the Hymar project; an EEC funded collaborative research and development project to develop a state of the art marine hybrid power system for vessels up to around 24m in length. As the partners for this project were being assembled it was perhaps a foregone conclusion that the propeller of choice for further development would be the Autoprop, with its unique load following self-pitching properties already well known.
Eco*Star has been developed from the original Autoprop by a formidable team of expert naval architects, engineers and scientists from Bruntons themselves, the Stone Marine Group to which they belong, and the world renowned Insean Research Institute in Italy who provided invaluable assistance in evaluating and testing the propeller characteristics, mathematical modelling and optimisation.
The new propeller has all of the existing Autoprops abilities with drag reduced by as much as 85% on yachts when sailing, the provision of as much thrust in reverse as forward when backing down, without significant prop walk; and when motoring or motor sailing always able to provide the maximum thrust possible whatever the engine revolutions, weather and sea conditions.
The Eco*Star adds two very important additional benefits to a list that already makes it ‘the winner’ over all other propeller types. Firstly, electric motors provide constant torque throughout their rpm range. The Eco*Star, using its auto pitching ability, matches its own efficiency curve with that of the electric motor providing significantly more boat speed while using much less energy. Secondly, when speed is not a primary issue while sailing the Autoprop Eco*Star can be allowed to turn in the vessels wake at which point the drive motor becomes a generator; ‘regenerating’ up to 1Kw of power to the batteries.
..continues on page 2
Page 2 of 3. Bruntons new Autoprop Eco*Star propeller

Adrian Miles, Managing Director of Bruntons, is obviously delighted with the results of three years of research and development. “The Eco*Star is producing results which will result in significant savings for yacht and small commercial craft owners whose vessels are hybrid or solar powered whilst retaining and improving the performance of their boats. One of the unexpected outcomes of this work has been the dramatic improvement we have seen in both the economy and performance of purely diesel powered craft.”
The Eco*Star propeller is the latest propulsion development from Bruntons Propellers, a company at the forefront of propulsion design and technology working across all sectors of the marine industry; leisure, commercial and naval. Constantly developing designs, products and manufacturing techniques to satisfy the demanding requirements of naval architects and builders the company has an impressive range of products. As well as the Autoprops they produce a full range of custom designed and manufactured fixed propellers; CPP systems for engines from 400hp to 1200hp, and the Varifold folding propeller range in 2, 3 and 4 blade versions for sailboats from 6m to 45m. The company also produces the Autolock automatic shaft locking system and the IonGuard retractable and replaceable anode system.