A new boat brand was born in Finland today 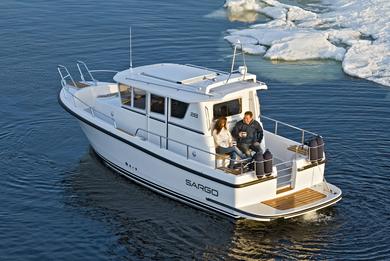 The fresh Sargo brand is based on 50 years of know-how in boat building. The international launch took place in Nauvo guest harbor 9th of June 2014. The global boat business has substantially grown over the years – and so has the size of the sport utility boats built by Sarins Båtar Oy Ab . That is why the family-run company based in Kokkola, on Finland's West Coast, has decided to leave its old brand name Minor in history. A more updated and internationally confident name was launched today at the Finnboat Floating Show before the international press in the midst of Southwestern Finland's most awesome archipelago in Nauvo.
The boatbuilding company, Sarins Båtar Oy Ab, is very proud of its great pioneering tradition under the name Minor since the 1960s, while it now continues its growing operations relying on the new brand name Sargo starting from today. Sargo conveys a fresh new brand promise better suited to this successful family company's ever growing international market, yet still firmly based on its successful, long-standing and rock-solid tradition.

- Sargo links our past to the future. The new name transforms decades of accumulated know-how to our well-grounded visions of the future of environmentally responsible pleasure boating.
We are also convinced there is a growing demand for this kind of thinking internationally, said the company's retired founder Mr. Edy Sarin who was present in the launch.

The new name has more than one meaning: it links the family name, SAR in, with the dynamic and challenging verb 'to GO.' As a more maritime explanation, Sargo also refers to a fish, known as Diplodus Sargus in Latin, a species that lives in the Mediterranean, the eastern Atlantic Ocean and western parts of the Indian Ocean.

- The core of our brand has always stood for an All-season Boat made in Finland for serious boaters, whether professional or pleasure – a sport utility boat that is made to last, to provide excellent performance characteristics even in demanding conditions, and to give true value for the money. With our new brand we are even better prepared for the upcoming export campaigns for the international market, said the CEO of Sarins Båtar Oy Ab, Mr. Thomas Sarin. He is the son of the legendary boat builder Mr. Edy Sarin who started the company back in 1967.

The key brand characteristics for Sargo Boats are: solidity, safety and tough sportiness. Every solid Sargo vessel is an outcome of proven boatbuilding know-how, representing an ambition to reach to the highest quality without compromises.
The main idea is to offer a lasting prime product. Every safe Sargo boasts technical solutions, performance characteristics and standard equipment that make boating safer. A great many Minor/Sargo boats have been exported to professional customers, such as police and rescue authorities, that need heavy-duty vessels throughout the year. Every tough & sporty Sargo provides a unique boating experience across the model range (25'-36'): Sargo's great handling in rougher conditions, its quietness and smooth ride, and its well-planned practical details are all exemplary.

All Sargo models have the international B-Offshore certification. So far the company has built a total of nearly 2,000 boats. Today 86 per cent of the annualproduction goes to export in the global market covering 15 countries from Japan and Russia to the US. The annual turnover of the company was nearly € 8 M during 2013. Sarins Båtar Oy Ab has two own production facilities in the Kokkola area and relies on many local subcontractors. For more information, contact CEO Thomas Sarin (email: thomas(a)sargoboats.fi) or at +358-500-784469