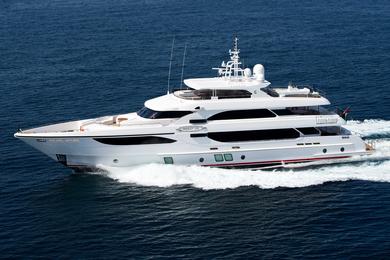 Homegrown yacht builder Gulf Craft breaks into the list of the World’s Top 10 superyacht shipyards, moving up from previous ranking of 17.

The United Arab Emirates has been named among the world’s Top 10 superyacht-building nations in the recently released 2014 Global Order Book, a report issued annually by the Boat International Group.

The UAE claimed the 9th place with 18 yachts over 24m currently under construction in the country. Enabling the UAE to sail into this prestigious listing as the manufacturer of 15 of the country’s 18 superyachts currently on order, is UAE-based yacht builder Gulf Craft. Gulf Craft also clinched a top 10 ranking among the world’s superyacht-building shipyards, moving up to the 10th position from its previous ranking of 17th.

Majesty Super Yachts line-up
Commenting on the achievement Mohammed Hussein Al Shaali Chairman, Gulf Craft said: “Gulf Craft takes the opportunity to congratulate the UAE President, the UAE Vice President and Ruler of Dubai, all the rulers of the UAE and the Emirati people for this achievement.

The news coincides with the recent celebration of 42 years of the Union and the recent win of the Dubai Expo 2020 and is yet another endorsement of the UAE’s successful economic standing. The UAE today is a prominent player on the global stage and in recent years has consolidated its position in a number of different key sectors.

At Gulf Craft we are honored to be a part of this accomplishment and to contribute to advancing the UAE’s global position among the world’s leading yacht-building nations.”

He added: “Gulf Craft has pursued a clear strategic vision aimed at propelling the company to the forefront among manufacturers of luxury superyachts. Our strategy has been driven by a pursuit of innovation, high quality and high value and our achievements in recent years have garnered global recognition, confirmed by this latest ranking. At Gulf Craft we have invested in the human capital and expertise as well as the facilities and technology to enable us to produce vessels that are globally competitive and adhere to international standards.”

Today Gulf Craft has a wider superyacht product offering than ever before in the company’s history with eight different models available between 24m and 50m. The company has made significant investments in recent years in the development of its facilities and know-how which has grown global appreciation of the high standards of quality and innovation evident in its superyachts.

As a builder of made-to-order luxury vessels, it’s the personalized approach and flexibility brought to each individual build that has helped put Gulf Craft and the UAE on the superyacht building map, enabling it to far outperform its peers as well as grow its brand equity in mature international yachting markets such as Europe.

“Gulf Craft has succeeded, thanks to the ambitious vision of the UAE’s leaders, the UAE’s nurturing business environment and the high flexibility offered to entrepreneurs keen on advancing their individual businesses as well as the industry in which they operate. The economic approach adopted by the UAE has played a pivotal role in advancing our efforts and these factors have allowed us to adopt a leading position within the superyacht market, both locally and internationally,” concluded Al Shaali.

According to the 2014 Global Order Book, this is the first time since the record year of 2009 (when 1,008 new orders were recorded), that the number of new build yacht projects globally has been higher than that of the previous year.

This year’s Global Order Book reveals that 735 new yachts are under construction or on order, a 6.2 percent increase over the 692 projects in the 2013 Order Book. The publication termed the reversal of a decreasing trend of superyacht orders that lasted four years as “certainly good news” for the industry.