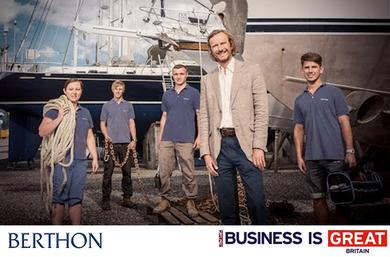 Back in 2011 David Cameron announced the GREAT campaign - it would focus on everything the UK has to offer as one of the very best places to visit, study, work, invest and do business.

It would centre on areas of British excellence covering reasons to invest in the UK and reasons to visit the UK. These areas are Technology and Innovation, Entrepreneurship, Creativity, Knowledge, Green, Heritage, Sport, Shopping, Music and the Countryside.

In early 2014 Berthon was approached to be included in the “Business is GREAT” campaign, due to our continued commitment to retaining skills in the marine industry through apprenticeships.

In 2009 Berthon gained government funding to run an Apprentice Expansion Pilot, which allowed us to engage with industry competitors to bring a thriving apprenticeship model to 15 businesses, 13 of them new to training, to employ 60 new apprentices with the graduation success rate constantly over 90%.

In the last 5 years we have placed or hired more than 100 apprentices in 35 different marine businesses, with a 95% success rate in taking these apprentices to graduation. We also work closely with marine trade bodies to create new courses to guarantee the qualifications that are gained are fit for purpose, ensuring the skills gap is not widening.

The following video was shot as part of the campaign to highlight how apprentices can expand your business, increase efficiency, reduce warranty problems and reduce the skills gap and wage inflation in the marine industry with Managing Director Brian May talking about the importance of apprenticeships not just for Berthon but for competitor businesses also. Click on the video immediately below:

We also had a proud day at the recent Southampton Boat Show where some of our marine apprentices graduated with certificates handed out by Ben Ainslie. For footage click – <a href="http://www.berthon.co.uk/berthon-blog/berthon-apprenticeships/7-berthon-apprentices-graduate/">Berthon Apprentice Graduation</a>.

Training apprenticeships is at the core of the Berthon ethos and we are massively proud of the young people here at Berthon, their enthusiasm, nascent skills and what they achieve.