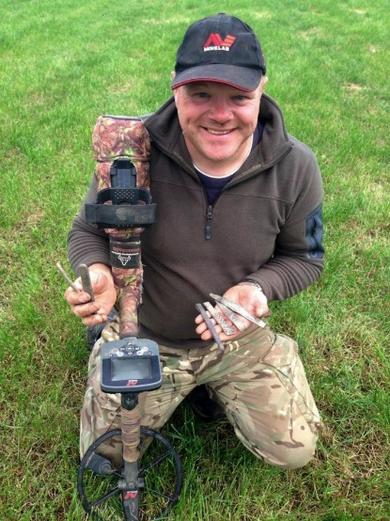 One of the largest and most important discoveries of Viking treasure in Scotland was unearthed in September 2014 by 47 year old retired businessman Derek McLennan.

More than 100 objects, including solid gold jewellery, arm bands and silver ingots, were discovered by Derek on church land in Dumfries and Galloway.
The artefacts, thought to have been buried between the mid-ninth and 10th century, include an early Christian cross made of solid silver, with unusual enamelled decorations.
Derek’s detector, a Minelab CTX 3030, picked up a very deep sounding "iron" signal, with the slightest kiss of a "good" signal mixed in with it. This was a signal that most seasoned detectorists would tend to ignore, but something told him that he needed to dig it, and at around 60cm depth, he uncovered the top layer of the hoard.
Derek admitted that he initially failed to recognise the significance of his find.
“I unearthed the first piece. Initially I didn’t understand what I had found because I thought it was a silver spoon and then I turned it over and wiped my thumb across it and I saw the saltire-type of design and knew instantly it was Viking. Then my senses exploded.”

One of the most intriguing and exciting objects in the hoard is an intact Carolingian pot with its lid still in place, a rare vessel likely to have been an heirloom held by a family. The Carolingian dynasty was a Frankish noble family with origins in the 7th Century and this vessel was probably buried for safe keeping, almost like a safety deposit box that was never claimed.
The vessel is unquestionably the largest complete Carolingian silver alloy vessel ever discovered and is approximately 18-20cm tall and around 10-14cm in diameter. The archaeologist who excavated it, Andrew Nicholson, remarked that it was a good weight and thus full of something heavy, so it is possible that the contents, yet to be examined, will reveal more surprises in the form of unprecedented treasure artwork.

The entire find is arguably the most magnificent Viking treasure ever discovered in the UK and one of the finest anywhere in the world. The items contained within the hoard are without parallel and there are already several unique works of art. The main hoard was made up of the following:

• Dozens of large solid silver ingots of all shapes and sizes, made using different manufacturing methods, using natural stone or clay moulds. These particular Viking ingots appear to be of a larger type than those typically found.

• A unique solid gold bird pin probably of Anglo-Saxon origin, which may be either a dress pin or possibly a pointer for reading texts from a manuscript. The bird could be a stylised version of an eagle, or possibly a cormorant in a similar style as those found in the book of Durrow and the book of Kells.

• A large 16gm solid gold ring not typical of the Viking style and a large gold ingot, possibly the largest found in the UK. These gold artefacts appear to have been contained within a small wooden box or ribbed wooden wrap.

• A unique solid silver Christian cross with beautiful carved decoration, and inlaid with solid gold and enamel, which could date back to the 7th century. It is of an early Celtic design and again might have originated in Ireland. The cross could be one of the earliest Christian crosses ever discovered in Scotland and the UK. It has depictions of the four evangelists (Matthew, Mark, Luke and John) in a very early style and could possibly be related to Saint Columba and the monasteries on either Iona or Lindisfarne.

The hoard was excavated in context by archaeologists, the first time that this has happened in the UK in modern times. It was found to be buried in two layers, with the top level meant as a diversion for anyone looking for and finding the main hoard. The much greater treasure was put into a bottom layer which was cut into the hard packed natural gravel. The manner of burial suggests that those who buried it were perhaps not sure if they were being watched, even by their own men. The treasure was also not contained in either a lead or wooden box, but appears to have been contained within a leather sack. We can only speculate about the circumstances of the burial at that time, but it is possible that the treasure hoard was the result of looting by a group of Viking raiders making its way through Scotland.
Derek detects with a small group of friends who call themselves "The Ayrshire Division" as they all live or have connections to the Ayrshire region in Scotland. Three of the group, Derek, Marty, Sharon carry out extensive research in order to pinpoint interesting areas which will be the best places to metal detect. The group fully supports archaeologists and the important work they do and they actively promote responsible metal detecting, viewing it as an addition to the ‘archaeological machine’.
Derek explained that he tends to ‘think outside the box’ and look at the more obscure areas, delving into the history to find the clues that he needs. It is directly through the experience he has gained from finding hoards that he has developed a system for locating more of them, a system that he shares with his group. Others are now researching based on this system and are now also finding hoards for the group to recover. They have now discovered 7 treasure hoards within the last 18 months, and this particular find was the result of their research system which alluded to the possibility that their search area ought to produce some historic finds ranging from Bronze Age through to post medieval as well as indicating signs of Viking activity.
As a group, Derek and his friends like to encourage the local community to become involved and to search for their heritage with them. He says that his greatest dream is that only positive things should happen as a result of this discovery and that it should provide a great deal of pleasure for everyone. He also hopes that it will further our understanding of the Vikings and may also add some more understanding to the spread of early Christianity throughout Scotland.

An important find like this could influence the way Scots view their historic relationship with the Vikings who are traditionally regarded as foreigners who carried out raids on Scotland. The locality of this hoard however was a Viking area where they settled and traded, and the people who lived there were culturally and linguistically Norse.