EXCITING PROSPECTS IN 2015 FOR THE FLYING PHANTOM 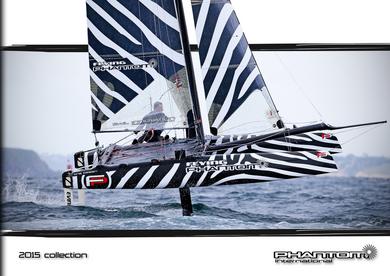 One year ago, the Flying Phantom One Design was presented to the public during the 2013 Paris Boat Show. The success was instantaneous with a unanimous, warm welcome from the press and the sailing community.

Some weeks after the first sailing sessions occurred, the order book started to fill up with orders from customers around the world. In order to face this high demand, Phantom International recalibrated the production capabilities, while ensuring the product matched the high-end requirements, reliability targets and the essential reproducibility for One Design. The Flying Phantom is made using a very high tech process involving carbon pre-preg with Nomex honeycomb sandwich cured at high temperature and then painted with epoxy, so specific industrialization tools are needed to sustain the volume of production and ramp up the capacity from 3 boats per week up to 4 boats per week starting next month.
So far, 60 Flying Phantoms have been ordered, with 30 boats now shipped out of the factory, while the backlog will be resolved by the end of January 2015.

During 2014, the Flying Phantom sailed by Gurvan Bontemps and Benjamin Amiot obtained nice successes on racecourses like the Eurocat or on Lake Geneva. Furthermore, dozens of sailing days were clocked up to ensure ongoing improvements and to optimize racing settings and boat performance. These flying sessions were also an opportunity to share the foiling experience with famous skippers such as François Gabart, Philippe Presti, Loick Peyron, Nathan Outteridge, Franck Cammas, the Red Bull Sailing Team … as well as youth and amateur sailors.

The Flying Phantom Series: the 2015 European Tour
2015 looks exciting; as the Flying Phantom fleet will grow quickly during the first quarter of the year, with the first event of the Flying Phantom Series due to take place in Carnac, France during the Eurocat from the 29th of April to the May 2nd. Prior to the event, Phantom International will organize technical, tutorial and training sessions for Flying Phantom owners to prepare for this first, fantastic event. The race format is being prepared, with the aim of setting up race courses like in the America’s Cup with reaching starts and finishes to guarantee enjoyable racing for the sailors and the spectators. The Flying Phantom fleet will also take part in the long distance race with the clear goal of beating the record set by Gurvan Bontemps and Benjamin Amiot this year.

Following the Eurocat, the fleet will compete in specific events with the same One Design regatta format during Foiling Week and Travemuender Woche, as well as racing in long distance races like the Round Texel, the Raid Emeraude and the Raid des Corsaires.
Phantom International is also in discussions with the Marseille One Design organizers to assess the possibility of joining the event that will be held in Marseille in September 2015.

Main events on the 2015 calendar

The Phantom Sailing Team
In 2015, the Phantom Sailing Team will be a 2 boat team with Billy Besson – Matthieu Vandame and Gurvan Bontemps – Benjamin Amiot. Both crews will compete in the 2015 regatta season and will foil the Flying Phantom around the world.
Billy, Matthieu, Benjamin and Gurvan are sport catamaran specialists. Billy just won the ISAF World Cup, was twice Olympic catamaran world champion in 2013 and 2014 with his team mate Marie Riou, 2013 Formula 18 World Champion and finished second in the International C-Class Catamaran championship. Matthieu was 2012 Formula 18 World Champion with Olivier Backes on the Sail Innovation Phantom F18 and crewed for famous skippers such as Franck Cammas and François Gabart. He is also pursuing an Olympic campaign with Audrey Ogereau. Gurvan and Benjamin represented the Phantom Sailing Team in 2014, when they started to show what the Flying Phantom could achieve in some multihull regattas. They are also vice 2014 Formula 18 World Champions.

Come and visit us
The next date on the calendar for the Flying Phantom and Phantom International is the Dusseldorf Boat Show that will be held  from the 17th to 25th January 2015. Come and visit us and meet the team at booth E39-Hall 15.