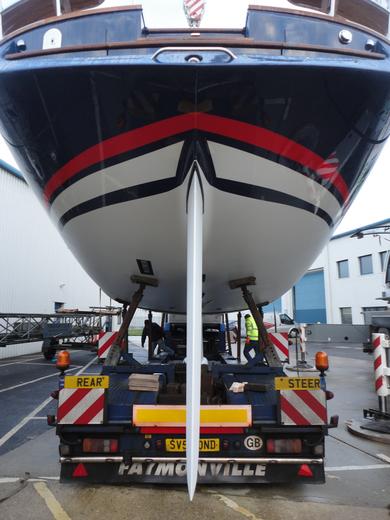 British based luxury yacht builders, Discovery Yachts, have chosen Europe’s largest boat show, Boot Dusseldorf, to launch their brand new Discovery 58 sailing yacht. It’s no mean feat delivering a 58 luxury yacht across the channel and up the Rhine in January, but the yacht will be ready for its official worldwide debut on Saturday 17th January 2015 after a 400nm trip which began last week.

The brand new yacht, a 58ft luxury sailing yacht, has been specifically designed for cruising couples to explore the world’s oceans in total safety and complete luxury. The new Discovery 58 is built to the highest quality by a team of expert craftsmen and shipwrights based at the shipyard in Marchwood near Southampton. With the option of single or twin wheel steering as well as a three or four cabin layout, the Discovery 58 offers exceptional versatility for an increasingly international customer base.

Getting a brand new 58ft luxury yacht from the South Coast of England to the middle of Germany in January is no simple operation. The yacht left the shipyard by transporter last week and was put in the water at Ocean Village Marina in Southampton. A team from Discovery has navigated the yacht across the English Channel to Rotterdam, where they began a 140 mile journey up the Rhine to Dusseldorf. The 58ft yacht will be lifted out of the water using the huge machine called ‘Big Willie’ for a short truck ride through Dusseldorf into the exhibition.

Commenting on the operation, Alastair Walton, Sales and Marketing Director said, “This is an extremely proud moment for Discovery Yachts. Displaying a large yacht at an international event is a significant investment for Discovery, but with 90% of our yachts going for export, Boot Dusseldorf is the right event to be doing it. The show offers an unparalleled international stage for new yacht launches, and is the perfect platform to champion British boatbuilding at its best. With the first two Discovery 58s already sold, we know we have created a winning design that offers the luxury, comfort, performance and exceptional quality that our clients expect. We are expecting a busy show, welcoming an international mix of prospective purchasers on board our stunning new yacht.”

The official unveiling of the new Discovery 58 will take place at 1400 on stand 16D40 Saturday 17th January 2015. The yacht’s owners will be on-hand to cut the ribbon and toast the yacht with a glass of champagne.