In glorious sunshine, against the beautiful and inimitable backdrop of the Sydney Opera House and Harbour Bridge, the last Act of the 2015 Extreme Sailing Series™ lived up to expectations. Thousands of spectators lined the shore to watch the nine-strong fleet battle it out, just metres from the shoreline of the Royal Botanic Garden in the heart of Sydney Harbour.

Battle for second place
After 28 close-fought races that saw multiple crashes and a spectacular capsize on day two, British skipper Leigh McMillan made history, becoming the only skipper to win three Series titles on the global tour in the nine-year history of the circuit. It wasn’t an easy ride for any team, and once again the racing went down to the wire as the indomitable McMillan and The Wave, Muscat, won the final double-points race in style. Not far behind, the battle for second place was fought out by Red Bull Sailing Team and SAP Extreme Sailing Team, with the former needing to finish second in Sydney to take second place overall in the Series. But there was nothing predictable about their fight to the finish. 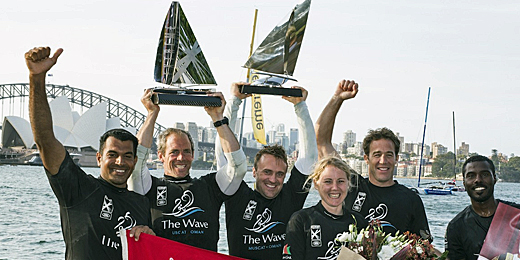 SAP second
In the thrilling final race, Gazprom Team Russia crashed into SAP Extreme Sailing knocking them out of the action and potentially losing them second place. However, the international jury awarded SAP redress, squeezing them into second, just two points ahead of Land Rover sponsored Red Bull Sailing Team.

Third for Red Bull Sailing Team
Commenting on their third place result, double Olympic champion and Skipper of Red Bull Sailing Team, Roman Hagara said: “It’s hard to say ‘what if’ but it would have been nice if a few more things went our way this week. At the end of the weekend and at the end of the season we can look positively on our win at the first Act in Singapore, some great racing with the youngest crew on the circuit, and of course our seven wins in two days in Sydney. It’s been a great year and we look forward to being back on the racecourse in 2016.”

Outstanding performance awarded
In addition to the two trophies Leigh McMillan and his team on The Wave, Muscat collected for the Act and Series, the British skipper was also presented with the Land Rover Above and Beyond Award for his outstanding performance this year and three Series titles. The ultimate Series Man of the Match. “It’s a real privilege to win this award in Sydney. It’s been a great relationship with Land Rover and the Extreme Sailing Series for the past three years and there isn’t a better place to have won.”