Celebratory magnums of Moet champagne and potent local Caiprinhas were in evidence on the winners' dock as Itajai welcomed, in short order, the winners of the Multi 50 Class and the white hot IMOCA monohull class, but the key, respective skippers were also toasted for their own personal triple and double triumphs on the biennial Transat Jacques Vabre race.

Double and triple wins
Multi 50 class winner Erwan Le Roux made it three Multi 50 wins, two back to back, when he and Italian co-skipper Giancarlo Pedote brought FenêtréA-Prysmian across the finish line in Brazil on a boat he helped Franck Yves Escoffier build as Crepes Wahou in 2011. A double, back to back, win was also completed by 2004-5 Vendee Globe winner Vincent Riou when he and Seb Col guided PRB across the finish line with second placed Armel Le Cleac'h on Banque Populaire VIII, the last surviving new generation IMOCA still in the race, lying 60 or so miles behind in second. 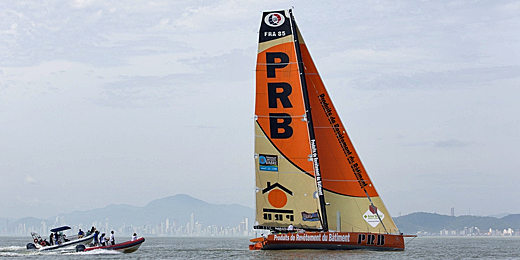 Back to basics
Riou and Col set a new IMOCA class reference time for the 5400 miles course 19 minutes and 23 seconds faster than in 2013. Riou revealed on the dock that they had sailed all of the course with no wind instruments, only Course over Ground and Speed over Ground outputs. Their enforced back to basics approach, sailing by feel and instinct, saw them sail 4.45% faster than in 2013 covering 4.35% more ground. As Riou bids for a second Vendee Globe win next year, his objective was to learn from America's Cup helm and grand prix monohull ace Col.