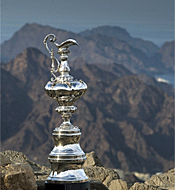 America’s Cup racing will return to New York for the first time since 1920 with Louis Vuitton America’s Cup World Series racing on May 7-8, 2016. The New York event is one of six events planned during 2016, each featuring thrilling, high-speed competition, as six America’s Cup teams, with the top sailors in the world, vie for points that count towards the final competition for the 35th America’s Cup in 2017.