Francis Joyon with his crew of five on the big red trimaran IDEC SPORT crossed the start line off Ushant at 02:02:22 on Sunday 22nd November 2015. They will have to return in less than 45 days in order to see their name written on the prestigious Jules Verne Trophy. On the very same day at 4:01:58 GMT, the maxi trimaran Spindrift 2, led by Yann Guichard with a crew of 13, crossed the start line for her non-stop circumnavigation.

Tough time to beat
The two boats are making their descent of the Atlantic at the same time, and should cross the equator in around five days’ time. The record attempt by Dona Bertarelli and Yann Guichard and their crew began four years to the day since the current record-holder, Loïck Peyron, began his attempt. Banque Populaire V set that record at an average speed of 19.75 knots (36.58 km/h) for the theoretical shortest route of 21,600 nautical miles via the three capes (Good Hope, Leeuwin and Horn), but they actually travelled 28,965 miles, averaging 26.5 knots (49.08 km/h) over the six weeks. The time set in that impressive performance was 45d 13h 42m 53s, a tough time to beat. 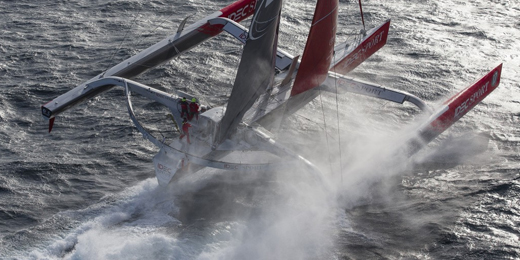