Enchanting experiences in the Dive Center

"Mermaids really do exist," says 34-year-old Katrin Gray, who lives in Australia, with a wink. Even as a little 5-year-old girl she was fascinated by Walt Disney's Arielle, like many little girls at that age. She wanted to be like Arielle; to swim so well and dive into the fascinating underwater world.

After finishing school Katrin decided to realize her childhood dream and to "finally become a mermaid". She took various diving courses and developed her skills and knowledge about diving so quickly that she became a diving instructor herself. She continued to refine her skills underwater, so that she now not only teaches beginners, but also offers advanced training courses and is booked as a professional diver; e.g. as an underwater stunt model for film and television or advertising campaigns. 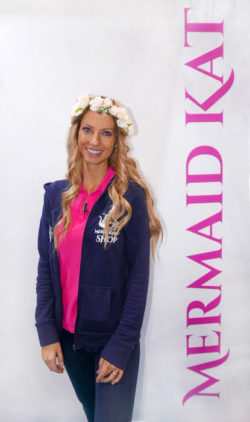 "The trend sport has become a passion", says the qualified diving instructor, who has turned her hobby into a profession. Like a dolphin, I tried to move around in the water even then, she remembers. She lived in Egypt and Thailand for a while. She searched and found fins on the internet, but they were of poor quality, as it soon turned out. So Katrin and her team developed their first own fins, but they had to be tested again and again and made more durable before they went on sale. In March 2013 she opened the first online shop for mermaid equipment.

She offers handmade pieces, which you can admire or buy in hall 12 - at booth A 38.

Worldwide there were only a handful of mermaids in Thailand in May 2012, but the interest in "becoming a mermaid" was growing rapidly. The idea was developed to found a "Mermaid Kats" - Academy; because the demand grew constantly - made famous by Facebook. In August 2012 Mermaid Kat - that is Katrin's stage name - founded the first mermaid school in the world. She sees herself only as a fictional mermaid; of course she is and enjoys being a human being with two legs. So far, about 7000 mermaids and mermen (ratio about 95 : 5) have been trained. Regular courses can also be taken in 7 federal states in Germany.

Apnea diving (which means to stay under water for a long time only with a deep breath), cave diving, technical diving (e.g. with 2 oxygen tanks) - diving with tiger sharks and saltwater crocodiles - simply everything beyond normal sport diving, Katrin Gray can do and offers these activities.

Find out about the highlights at boot Düsseldorf 2019.
Read more