The Ferretti Yachts 700 immediately strikes the eye for its slender, aggressive profile - one of the sportiest ones ever in the brand's history. Hull restyling has involved in particular the large hull glazed surfaces - three per side -,which, preserving the family feeling with those found on the new 55-footer, are stanchion-free and with flush glued portholes, providing a wide unobstructed view. This new model, which is the outcome of the long-standing cooperation between Zuccon International Projectand Ferretti Group's Engineering Department, offers the best an Owner can expect. Innovative functional and aesthetic solutions are  key features in the brand’s yachts.

The aft area of the yacht is characterized by several important innovations, above all a carry-over from all the latest Ferretti Yachts models that will be undoubtedly very much appreciated including the swimming platform with integrated tender lift that can be diagonally lowered by approximately one meter below the sea level. This system results in a large underwater bathing area and allows guests to easily go into and come up from the water, also thanks to a series of steps integrated in the hull that are revealed when the platform is submersed. This also eliminates any need for a davit for tender launching and hauling operations. To the right of the staircase leading to the cockpit two large peaks have been obtained, the first at the swimming platform level, the second behind the aft sofa.

The members club of the boot Düsseldorf offers many exclusive benefits.
Read more

Main Deck
The large cockpit, which can also be accessed via a concealing gangway to port, is fitted with a long sofa, facing the fixed teak table that can seat up to eight people. A steel framed sliding glazed door, beside the staircase leading to the flybridge, allows access to the interiors, while to starboard the stairs lead to the crew quarters, consisting of a single cabin, a separate head, and a laundry area along the starboard bulwark. Stepping in through the glazed door, access is gained to a breathtakingly wide and rationally arranged salon - an open space with all sides open onto the sea. The eye can sweep freely from the stern to the extreme bow, through the living room, the dining room, and the pilot station, which unravel in an orderly, uninterrupted succession.

Lower Deck
The guest area layout bears witness to the Ferretti Yachts 700’s great versatility. The two layouts mainly differ in the design of the lobby and the guest cabins, while the master stateroom and the VIP suite, at the bow, remain unchanged. Every cabin can benefit from plenty of natural light, thanks to the stanchion-free windows with flush portholes - 2 per cabin. All cabins also share the same type of décor, always reflecting the greatest possible care for details. The bathrooms’ style has been harmonized too.

Find out more about Ferretti Yachts in our exhibitor database

Cabins
The full-beam master stateroom, located amidships, is vary spacious and rationally arranged. The two windows are surrounded by frames that enhance the sinuous, rounded shape of the glazing. The large Owner’s bathroom, with a large separate shower box, and the walk-in wardrobe are located behind the bed - a solution that further increases the distance between the master quarters and the engine room, which are now separated by both the sailor’s cabin and the tank, minimizing noise. The cabin furniture is completed by a vanity set and a stool to starboard and, on the opposite side, a sofa and two chests of drawers. The VIP cabin is located at the extreme bow. It features a double bed and a private bathroom with separate shower, which is accessed from the central corridor. In the four-cabin version, two steps lead down to the master quarters, while two side doors give access to the large guest cabins, both with twin beds and private bathroom with separate shower. Upon request, the right guest cabin can be fitted with a double bed. In the three-cabin layout, the guest cabin is furnished with a double bed that, upon request, can be converted into two separate single beds. This cabin can rely on a bathroom with separate shower. In this latter version, the lobby is located along the port bulwark and is lit by the hull glazing with two flush portholes.

Flybridge
The flybridge, protected by a roll bar where the Bimini top can be installed, is the result of a painstaking design process aimed at ensuring maximum relaxation in all outdoor areas. This is why this new 70-footer also features a large forward sunbathing area on the deckhouse, where guests can relax enjoying the utmost privacy. To the right of the flybridge staircase is a bar unit, beside which is the dinette, featuring a large C-shaped sofa and a table. The second pilot station can be found on the starboard side. A small sofa facing the sea stands beside the forward sunbathing area, on the port side. The flybridge can be used and enjoyed entirely, all the way to the stern, as the installation of antennas and satellites systems on the roll bar, together with a pulpit in the aft part, has allowed freeing up the entire area. This is a very flexible relaxation area, with teak flooring on the first hull, which the Owner can also decide to use for additional storage purposes. An alternative version of the flybridge is also available, featuring an aerodynamic hard top with an electrically-operated awning that covers most of the forward and aft parts.
Technical Data:
Length: 21,58 m
Beam: 5,53 m
Draft: 1,70 m
Displacement: 42.300 kg
Engine: max. 882 PS
Other Large Motoryachts... 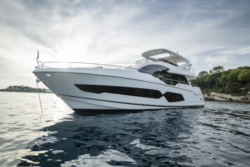 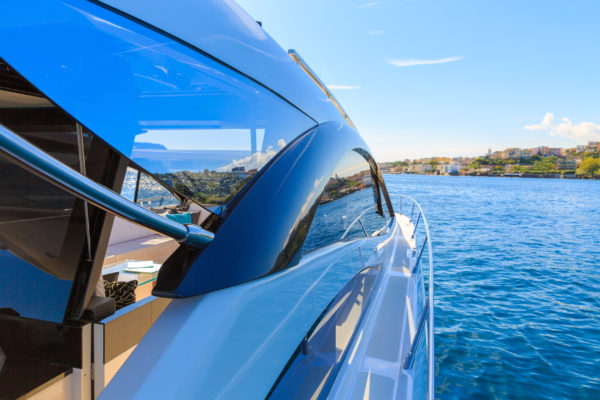