How to get into the waves with ease

They were called spongers and cripples, ridiculed as speed-robbing outgrowths of surfing. But bodyboarding has long since become a sport in its own right, established at many spots around the world. Almost as many riders take to the short foam board as the longer surfboard. Experienced bodyboarders can be seen everywhere on beaches with big waves: in Brazil, Portugal or on the Canary Islands. But beginners can also enjoy the sport in small waves as small as half a meter, for example in the North Sea and Baltic Sea. And especially for beginners in the board sport, bodyboarding is often the easier way into the wave. We show you what is important:
Lying is easier than standing
The ease with which the basics of the sport can be learned make it particularly appealing to many water sport beginners. Even those who only have a few weeks a year to spend on the water can quickly gain intense experience in the waves while bodyboarding. It is helpful that the waves in bodyboarding are ridden lying down, with the board as a gliding surface underneath. In surfing, you first have to learn to stand on the board. Therefore, many beginners choose the bodyboard as their first option.
Easy handling of board & fins in the wave.
When bodyboarding, fins can be put on to help you get faster into the line up, the starting point of a ride where the wave breaks. In the wave, the fins then help once again to get up to speed and with steering when the fins are pushed into the water like fins. Beginners also find it easier to swim through the surf and handle in the wave with the smaller bodyboard.
More equipment
You don't need much more than the board for bodyboarding! A "leash", that is the line between the rider and the board, which is attached to the lower or upper arm when bodyboarding, prevents the board from getting lost, disturbing other surfers or swimmers, or the board drifting too far away. A wetsuit protects against chilling and many a scrape. Some bodyboarders wax the top of their board for a better grip - matter of taste and also depends on the board's top material. Then add sun protection for the skin and off you go into the waves!

Important basic rules
Of course, safe bodyboarding also includes a few simple basic rules of surfing - above all, spot reconnaissance before you really go into the wave: Where are shoals, stones, corals or sandbanks? How strong are currents, tides and the incoming wave? What is the rhythm and pattern of the waves coming in? Where are other surfers? Do I have enough power to get back to shore safely? These are questions that everyone should ask themselves before they set off, so that nothing stands in the way of fun and an unscathed wash in the wave or two. A good advice is always to talk to the locals on the spot before the first ride. No one knows the conditions and specifics of the spots better than those who board here regularly. Sure, right? And in pairs or in a group, boarding - and everything else that goes with it - is not only more fun, but there's always someone around if there are any difficulties after all. 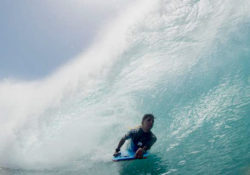 Technique and material in bodyboarding
As for the technique and material in bodyboarding and in bodyboards themselves, once again, do not underestimate the sport! As in kiteboards, windsurfing and surfboards, so in the small boards made of various synthetic and foam materials, partly also for reinforcement made of carbon, a lot of know-how and some further development. The boards have, rocker lines, channels and rails and specially machined tops and bottoms, which greatly affects the individual riding characteristics. A name you should know as a bodyboarder in this context is Tom Morey. In the 1970s he produced the first boards made of plastic, at that time under the name Boogie Board. Which board is exactly the right one for you is best explained to you by our trade exhibitors at boot Düsseldorf. Around Beach World at the boot you will find a wide range of boards and equipment with competent advice on site.

The coolest moves: rotations, backflips or airs
The real fun comes when boarding! As far as your riding technique in bodyboarding is concerned, after the first successfully ridden waves without a full wash, there are still many ways to improve: There are tricks like rotations, backflips or airs - on the water and above the wave in the air - that you can try out and practice. Another way to ride the board is in the so-called dropknee position: here you stand on the board with the foot of the front, bent leg. With the other leg you kneel on the back part of the board. The change of position can be a bit problematic at the first attempts - because of the fins on the feet. And of course, as a bodyboarder, you can also try your hand at tuberiding, which means riding through the tunnel inside a big breaking wave.
Events, Competitions & Associations
Just bodyboarding is not enough for you anymore? Then let's go to events and competitions! At surf contests there are the disciplines 'Surfing' and 'Bodyboard' and also independent bodyboard events: e.g. internationally the Grand Slam Series, a World Tour for men and women or the Dropknee World Tour. The German Surfing Association (DWV) and the International Bodyboarding Association International Bodyboarding Association (IBA) represent the interests of bodyboarders worldwide.

All themed areas of boot Düsseldorf areas at a glance.