European champions on the water 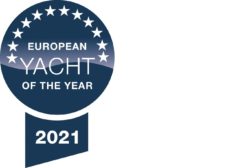 Virtual selection: a line-up of the best sailing yachts and powerboats of the year

The winners of the two prestigious awards, ‘European Yacht of the Year 2021’ for sailing yachts and ‘European Powerboat of the Year 2021’ for powerboats, were announced this Friday as part of a virtual awards ceremony. The watersports industry’s ‘Oscars’ are traditionally awarded at the end of January at FLAGSHIP NIGHT, the maritime industry event organised by publishing house Delius Klasing and ‘Boot’ Düsseldorf during the world’s largest watersports trade fair. Because of the pandemic, this year’s awards ceremony was recorded in the International Maritime Museum Hamburg without an audience. The five award winners in each section will be announced on YouTube under the following links: European Yacht of the Year 2021 and European Powerboat of the Year 2021.

In 2021, the international ‘European Yacht of the Year’ awards are being presented for the eighteenth time, while the ‘European Powerboat of the Year’ accolades are being awarded for the fifteenth time – albeit virtually this year, because of the pandemic, and not live in front of a large audience. This year the International Maritime Museum Hamburg provided the appropriate setting for the highly anticipated announcement of these accolades.

As always, the winners of these prestigious awards were chosen by an expert jury consisting of the testing coordinators and editors-in-chief of Europe’s leading twelve sailing and eight powerboating magazines. The two jury chairmen, Jochen Rieker, editor-in-chief of YACHT, and Torsten Moench, editor-in-chief of BOOTE, hosted their respective virtual awards ceremony.

A large number of new sailing yachts are launched in Europe every year. However, only five boatbuilders can claim the title ‘European Yacht of the Year 2021’. This time round, travel restrictions and quarantine regulations hampered the necessary and complicated job of putting each of the 19 candidates through their paces, but the jury was not prepared to drop this requirement. Three test phases at three locations (Kiel, Cannes and La Rochelle on the Atlantic coast) were therefore on the agenda in 2020 for the jury members from the twelve sailing magazines from Norway (Seilmagasinet), Sweden (Båtägande), Great Britain (Yachting World), the Netherlands, (Zeilen), Switzerland (Marina.ch), France (Voiles et Voiliers), Spain (Nautica y Yates), Denmark (Bådmagasinet), Austria (Yachtrevue), Italy (Vela e Motore), Finland (Vene) and Germany (YACHT).

All decisions are made on a jury majority basis; a nationality clause ensures that jury members cannot favour candidates from their own country.

This year’s winner in the Family Cruiser category was the Bavaria C42, thus providing the German builder straightaway with an unexpected result. Despite strong competition, the C42’s win was ultimately a convincing one; the Bavaria C42 impressed the jury with her high level of comfort and superb sailing properties. She can be sailed at speed in all conditions and yet is easy to handle. The C42 also scored points by providing good value for money, four design versions and a wide range of extras.

The Dragonfly 40 won the ‘European Yacht of the Year’ award for 2021 in the Performance Cruiser category. According to the jury, the Danish yacht sets “the new benchmark for sailing at speed”. The twelve-metre trimaran features a cockpit with twin helm positions and a tastefully sedate interior. The Dragonfly 40 conveys that genuine yacht feeling and is an absolute pleasure to sail. Her only disadvantage? The high purchasing price.

The Contest 55 CS triumphed in the Luxury Cruiser category. “She’s more than just a boat – she’s a genuine yacht”, expressed one jury member. “All-encompassing, no-holds-barred luxury”, is how another sailing expert succinctly put it. And although she hides her light under a bushel, except in terms of her sheer size, and retains very minimalist styling, the new 55 CS exudes a unique aura – a real wow effect.

This year the ‘European Yacht of the Year’ award in the Special Yacht category went to the Saffier SE 27. According to the jury, this day sailer, designed in IJmuiden in the Netherlands, is “proof that good-looking boats sail well too”. When being put through her paces in windy autumn weather off the Atlantic coast, the SE 27 did not display any weaknesses. What’s more, this award winner also does the business in light winds. At an LOA of 8.10 metres and a beam of 2.55 metres, she offers yachties with varying requirements a high level of entertainment value.

The jury said of the Boréal 47.2: “As functional as a Swiss Army knife.” The long-distance cruiser from Brittany scooped the 2021 award in the Bluewater Cruiser category. Her rustic ‘aluminium’ look contrasts with modern naval architecture features: a broad stern and twin helm positions. Furthermore, the 47.2 boasts exceptional ergonomics both on and below deck. While the builder’s previous models were designed more for high latitudes and for sailing in cold waters, this bluewater yacht is at home on all the world’s oceans.

This year the presentation of the ‘European Powerboat of the Year 2021’ awards did not proceed as planned – but was no less exciting. The expert jury comprised editors-in-chief and testers from eight leading European powerboat publications from Norway (Båtliv), Italy (Boatmag.it), France (Neptune), the Netherlands (Motorboot), Spain (Nautica y Yates), Switzerland (marina.ch), Austria (Yachtrevue) and Germany (BOOTE).

More than 200 new powerboat models are launched every year. Exceptionally, the powerboat experts had to decide on the 23 nominees for the European Powerboat Awards 2021 by video conference as well, with the aid of a sophisticated points system. Besides the usual quality features of a powerboat, such as workmanship or handling properties, the jury focused in particular on the candidates’ layouts, safety and value for money. Ultimately, the implementation of innovative ideas and concepts can also be a decisive factor and result in a win in one of the five award categories.

In the small Powerboats up to 8 metres LOA class, the Saxdor 200 Sport ultimately won the race. The Saxdor appeals by offering excellent value for money and superb handling properties. “These positives, combined with high-performance outboard engines, make the Saxdor 200 Sport a thoroughbred pleasure craft”, read the jury’s verdict.

In particular, boats in the Powerboats up to 10 metres LOA class must feature practical solutions, excellent workmanship and offer safe handling on all stretches of water. The jury regarded the Beneteau Flyer 9 as being a genuine all-rounder for the whole family. She provides a great deal of space, features a fold-down ship’s side and combines safe handling properties with a high level of comfort.

The winning entry in the Powerboats up to 14 metres LOA class was the Fjord 41 XL. Her sterndrives enable the new-generation Fjord to provide a considerably more agile ride than her predecessors. Available in all of nine different deck layouts, she can also be customised to a large extent as the owner wishes. First-class workmanship as well as superb handling properties also played a key role in the jury’s decision.

In the Powerboats up to 20 metres LOA class, the jury opted for the Absolute Navetta 64. She embodies the perfect combination of flybridge powerboat and explorer. The Navetta 64 provides plenty of space both in her interior and on deck. Large window frontages as well as the innovative execution of the stern cabin with direct access to the swim platform convey, according to the jury’s decision, “a unique sense of lifestyle on the water”.

In the non-LOA-dependent Displacement hull class, the 2021 ‘European Powerboat of the Year’ award went to the Turbocraft Silverfin.

The jury stated: “The Swiss builder is celebrating a successful comeback with the Silverfin. The design specifically embraces style details from classic powerboats and gives them a modern face. Good seagoing properties and, for this boat class, a long range at simultaneously high cruising speeds mean she deserves the title of ‘passagemaker’.

Pictures on this topic are available under downloads.