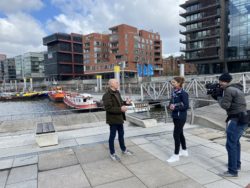 And the winner is: Mexican marine conservation project Codemar

Hamburg's ancient Speicherstadt district and the traditional North German Regatta Association overlooking the Alster formed the picturesque, maritime backdrop for the filming of ocean tribute 2021 on 6 May. Due to the pandemic, it could not be presented to the lucky winners in a festive ceremony in Düsseldorf this year. So the boot team around Project Director Petros Michelidakis developed a new idea to give the award ceremony a worthy setting.

The well-known tv presenter Kristin Recke invited trade fair president and ocean tribute jury member Robert Marx as well as the chairman of the German Marine Foundation Frank Schweikert to talk about the award, the difficult decision for the expert jury as well as international marine protection, which is important across all borders and countries.

Marx: "The decision for the winner was once again not easy for us. We discussed it hours and hours in the jury. In the end, we chose the Mexican marine conservation project Codemar. We made this choice precisely in view of the difficult environmental conditions in the region.” With its magazine "Equilibrio" the NGO – non-governmental organization - shakes up the people and provides comprehensive information about the current state of the oceans and about new projects to restore an intact nature. Equilibrio is part of Mexico's Codemar Project, which is working on a new marine protected area in the Sea of Cortez.

For the first time in the history of boot and its activities in support of marine conservation, the winners of the ocean tribute were informed of their win in a zoom call. The call started at 4 p.m. sharp in Hamburg and 9 a.m. in Mexico City with representatives of Codemar and editors of the magazine, who were still unsuspecting at this point and knew nothing about the fact that they had won the award. Accordingly, the jubilation in the editorial office that broke out after Michelidakis announced the win was great. Mario and Gabriela Gomez rejoiced on behalf of the whole team: "A win for Mexico's sea is a win for our world shared ocean. We thank you for believing in us and Equilibrio." The mexican NGO initiative was not only in first place with the expert jury, they also won in the favour of the public in the "Public Voting" with 75.4 percent.

In addition to the scenes and conversations from Hamburg, the film provides impressive sequences from Codemar's work and atmospheric images from the awards ceremonies at boot Düsseldorf in recent years. Petros Michelidakis: "It was not easy for us to do without a ceremony. But even without an official ceremony we wanted to award the winners with the greatest respect for their commitment. The result is an exciting film that vividly describes how important transboundary, global ocean protection is in our time." The film for the ocean tribute Award 2021 can be seen from 19 May on boot.de/boot.com. Photos of the "Making Of" in Hamburg are available on the boot social media channels - https://www.facebook.com/boot.duesseldorf and https://www.instagram.com/bootduesseldorf/?hl=de .

The ocean tribute has been awarded annually since 2017. Prominent award winners such as the Hamburg sailor and Vendée Globe participant Boris Herrmann (winner 2019) give the award considerable international significance. The initiators of the award are the Prince Albert of Monaco Foundation, the German Maritime Foundation and boot Düsseldorf. The prize money for the winner amounts to €20,000, which is borne by the Monegasque Foundation (€12,500) and boot Düsseldorf (€7,500). Information on the other nominees, the expert jury and the call for entries for 2022 can be found at https://oceantributeaward.boot.de/en/Home .

With 250,000 visitors, boot Düsseldorf is the largest boat and water sports fair in the world and the meeting point for the entire industry every year in January. Around 2,000 exhibitors present their interesting innovations, attractive new developments and maritime equipment. The next boot will take place in Düsseldorf from 22 to 30 January 2022. The nine-day fair with 220,000 square meters in 17 different halls will host the international market and offer an exciting insight into the entire world of water sports. There is something for everyone here. The focus is on boats and yachts, engines and engine technology, equipment and accessories, services, canoes, kayaks, kitesurfing, rowing, diving, surfing, wakeboarding, windsurfing, SUP, fishing, maritime art, marinas, water sports facilities, beach resorts and chartering. All necessary information can be found on the boot Düsseldorf website, boot.com.