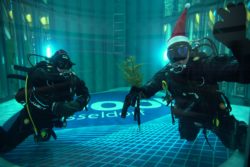 A marvel of Plexiglas and steel

For the general rehearsal of the new diving tower, Jürgen Sütterlin, tinkerer, designer and developer of the tower, Andreas Berg, in whose factory the tower was built, and boot project director Petros Michelidakis met on 16 December in the factory in Wiehl in North Rhine Westphalia.

The tower, which was filled with 200,000 liters of water for the first time last weekend, impresses with its all-round view. The marvel made of Plexiglas and steel guarantees the viewer a panoramic view of what is happening in the four-meters high and eight-meters wide tower.

The Düsseldorf diving instructors Jürgen Arends and Frank Penningsfeld are the first people to dive into the tower's waters, which are only 14 degrees Celsius. For the two 58-year-olds, is this a very special honor. Arends: "I have known boot for many years, of course, and am there as an exhibitor with my diving school. This new construction is something very special. The water is still a bit chilly, but with the right dry suit it's no problem and it will be much warmer at the show." Diving buddy Frank adds, "It's a great feeling to be the first one in the water." The two of them then glide into the tower, thickly wrapped up, and seem to feel right at home there. At the end of the dive, Penningsfeld celebrates a bit of Christmas in the diving tower with a Santa Claus hat and a fir branch.

For the developer of the diving tower, Jürgen Sütterlin, the first dive in his construction is a significant moment: "It's great that Jürgen and Frank are doing the test here for us and that they enjoyed it. For me as a designer, it's always a very special experience to see the finished product and be able to examine it in action."

Andreas Berg is also very satisfied with the construction of the diving tower: "Here in our factory, we did everything we could to build Jürgen Sütterlin's templates true to detail. For example, I think the access to the tower via the spiral staircase and the platform at the top, from which the divers can climb into the water, are very successful. The durable material is also important: the struts are made of stainless steel and the stairs of fireproof steel."

Petros Michelidakis is also impressed by the finished tower: "Of course I know the drawings and we already decided on this model many months ago, but to see it standing here fully operational is a great feeling. I particularly like the inclusion of the boot logo." The entire floor of the tower is covered with the fair's logo.

In mid-January, the tower will be delivered on articulated lorries to exhibition hall 12 in Düsseldorf. It will remain there until the boot trade fair in April 2021.

It will be officially inaugurated on 17 April at the opening of boot. Which celebrity diver will dive in is still a secret.