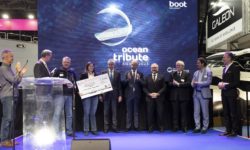 boot Düsseldorf unites the entire water sports community and also shines with its supporting program and accompanying events as a large family reunion and indispensable venue for exchange of ideas with personal conversations and live encounters. At the glamorous blue motion night in Hall 6 on Monday evening, January 23, the Innovation Yachts company was presented with the "ocean tribute" Award 2023. The Prince Albert II Foundation, boot Düsseldorf and the German Ocean Foundation support people, institutions, associations, research institutions and projects in their commitment to marine conservation and have been presenting the €20,000 prize annually at boot Düsseldorf since 2018.

"The "ocean tribute" award as a marine conservation prize is particularly close to all our hearts. The cleanliness of oceans and waters is more topical than ever and the protection of our seas is of enormous importance to each and every one of us," says Frank Schweikert, Chairman of the German Ocean Foundation.

The Innovation Yachts shipyard has designed and manufactured the world's first fully recyclable and sustainable composite catamaran for series production. The IY LBV35 is the first model in a new series of sustainable and fully recyclable boats and is electrically powered by solar energy as well as Hydrogenator. As an optional feature, this catamaran has a "marine cleaning system", which means that it can lower the trampoline in front when sailing to collect floating garbage. In addition, the company also guarantees to buy back all building materials (vulcanized fiber, balsa wood (FSC) & organic epoxy resin) to the customer in case of damage or at the end of the product life cycle.

Laudator Hannes Jaenicke announced the result from the jury and the public vote. The popular German actor has been involved in marine and species protection for many years and has often appeared in public with his concerns at boot in Düsseldorf.

A jury of experts from science and research as well as representatives of foundations and boot Düsseldorf screened the applicants for this year's "ocean tribute" award and selected five particularly committed projects. The jury placed particular emphasis on the practical effectiveness of the project, the involvement of as many people as possible in the initiative, and networking with other ocean activists.

"With the announcement of the "ocean tribute" award, boot has taken the right path. For many years, we have supported projects and activists who have taken up the cause of protecting the waters. So the announcement of an award was only the logical continuation of our work. Especially as we have competent companions and experts on board in the form of our partners from Monaco and the German Marine Foundation," explains boot head Petros Michelidakis, adding. "In doing so, we have made the United Nations' sustainability specification our guiding principle: the goal is to preserve oceans, seas and marine resources in terms of sustainable development or to restore what has been destroyed. The public presentation of the award is very close to our hearts. It has become a permanent fixture in the ranks of actions for marine conservation - as long as waters and marine habitats are in danger, we will continue to work to protect them."