The Aikaterini Laskaridis Foundation’s Latest Publication: “Shipwrecks of the Greek Seas – Dive Into Their History” 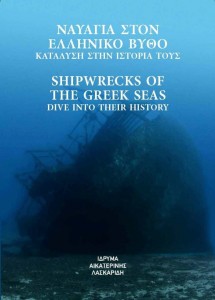 Shipwrecks of the Greek Seas – Dive Into Their History

Thousands of ships, merchant, men-of-war, ships of all kinds have been lost in the Greek seas. A close friend once asked us which is the most important shipwreck in the Greek seas. A question that is indeed difficult to answer. Is it the number of lives lost that makes a shipwreck important or maybe its size or its previous history or the facts that led to its sinking?

Choosing the first twenty shipwrecks was not easy. We decided to focus on shipwrecks that belonged to the era of steam, as few remains on the seafloor are visible today from earlier wooden sailing ships. A basic criterion for our selection was the feasibility of diving into the wreck, in order to be able to present our readers with a comprehensive description of the wrecks’ current condition. Among the ships that have sunk in the Greek seas, there were ships with a prominent place in Greek history, such as the cruiser ELLI. However, ELLI, as well as other historic shipwrecks, have been completely salvaged in the first post-war decades in a shipbreaking frenzy that did not take in account the historic value of each wreck.

Some of the shipwrecks that we chose are ships unknown to the general public, while some have only sunk in recent years. Still, all those are an integral part in the history of evolution of the merchant marine. No country could ever preserve ships of all kinds, from all historic periods, as floating museums. Nonetheless, in the deep of the Greek seas, there exists a great museum, were specimens from almost every kind of vessel that once sailed there, is exhibited. The shipwrecks that rest on the sea floor are a part of modern maritime history and we hope that his book will help bring them to prominence and lead to their protection.