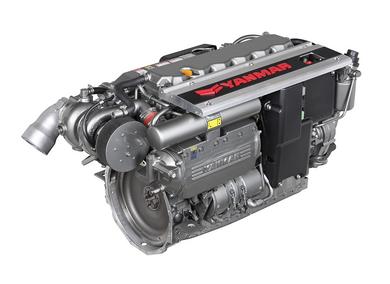 Boot Düsseldorf, Europe's premier winter boat show (23 – 31 January 2016) will provide the first opportunity for many boating enthusiasts in northern Europe to examine up close Yanmar Marine International's latest leisure and light duty diesel engine in the 400-500 mhp power range. Those who are aficionados of the company's offering in this engine segment (and there have been many over the years) may notice a certain familiarity about the new 6LY440/400.

That's because the new in-line six-cylinder engine is the fourth generation of a classic model that goes back to 1989. Developed specifically for marine applications, this was never a reworking of an existing industrial engine.

In its new guise, the 5.8-litre unit develops 440 mhp at 3,300 rpm with added boost from a water-cooled turbocharger. (Versions with 400 and 370 mhp ratings are also offered.) The engine uses the same slim-line block as the first-generation units and occupies the same engine unit. Only now, the engine is no longer mechanically managed. Like all new-generation Yanmar diesel engines, it is now precisely controlled by the latest sophisticated digital electronics. Yanmar's VCS (Vessel Control System) not only ensures optimum performance and fuel efficiency throughout its operating range, but also interconnects perfectly with other electronic vessel systems as well as giving the option of joystick control the manufacturer's own wireless lever system.

But that is by no means all that's new about the 6LY440. In common with all of the latest Yanmar leisure and light duty of 45 mhp and above, it now has common-rail fuel injection in place of single mechanical direct injectors. There's new pipe work to handle the higher pressures that the Denso common-rail system generators, as well as a new 24-valve cylinder head, along with a redesigned inlet and exhaust manifold for optimal engine breathing.

All this adds up to a new engine that comfortably meets benchmark US EPA Tier3 emissions and the new EU RCD2 limits which come into force this month, but in addition achieves a much-improved and now class-leading power-to-weight ratio of 1.7:1 (kW per kg).

"The new engine takes what was a very accomplished and highly popular power unit to a higher level," says Floris Lettinga, Yanmar Marine's Global Sales Manager. "Over many years on the water its forerunner gave long and distinguished service, it earned legendary status for its smooth performance, reliability and durability and is still widely regarded as one of the best marine engines in the world for cruising duty, although it has also been used for racing and light commercial operation. In its transfigured form we expect to see that tradition continue with strong sales for installation in new craft as well as in the refit sector, where its high power density and compactness will make it an engine of choice for replacement not only of earlier Yanmar units, but also larger, heavier units of similar output."

Also on display on the YMI stand are five more engines from the Yanmar range, all but one of them with common-rail fuel injection. Heading these is the 4.46-litre V8 diesel 8LV370Z with optional joystick control, which develops 370 mhp at 3,800 rpm and is mated with a Yanmar's own ZT370 stern-drive renowned for super-soft gear shifting with its specially-designed hydraulic clutch.

That's accompanied by the 6BY3-160, a 3-litre six inline inboard engine which develops 160 mhp at 2,800 rpm and is primarily intended for larger displacement yachts. It is shown with Yanmar's KMH51A gearbox for shaft-drive applications.

The 4JH-CR family of marine diesels, which had its public launch at the Düsseldorf show a year ago, is this time represented by the small and largest units in the range. The 4JH57 is shown with a Yanmar SD60 saildrive and is the smallest common-rail diesel inboard engine available in the global marine diesel engine market, while the head of the family, the 4JH110 is shown mated with a YMI KM4A gearbox.

Last and, in this case, least in power output is the 3YM30AE three-cylinder 1.266 litre which gives 29 mhp at 3,200 rpm, although for its size it's still the one of the strongest performers. It has direct fuel injection.