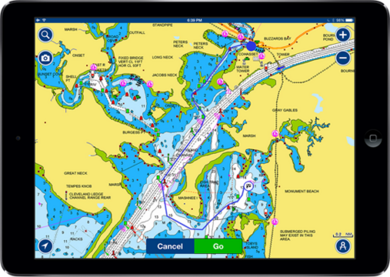 Navionics has made it even easier for boaters to plan
their outings on a mobile device using the Navionics
Boating app’s Dock-to-dock Autorouting feature.

The most advanced functionality for boating,
Navionics Dock-to-dock Autorouting provides a range
of capabilities and quickly creates detailed routes from
a real start point to a real end point, even through
narrow passages and channels, where it’s needed
most, thanks to sophisticated algorithms and massive
amounts of data.

With simple user input, boaters can choose a
beginning and destination by tapping on the map,
entering latitude/longitude or selecting a POI (point
of interest) like the harbor master, marinas and
moorings, fuel stations, restaurants and bars, shops,
taxis & launch services, repairs and dealers. A detailed
route is calculated taking into consideration chart
data, navigation aids, water depth and more. The app
displays the route and even highlights precautions
along the way such as shallow water, bridges and
other hazards. Estimated fuel consumption, distance,
and ETA are also shown.

In the latest release, POIs nearby the destination,
appear automatically within the Autorouting menu,
complete with phone numbers and other valuable
information like VHF channels for marinas.

“Navionics Dock-to-dock Autorouting is truly groundbreaking
in its ability to plot a course through the maze
of variables that one considers when route planning,”
said Don Black, senior vice president of global sales
and marketing, Navionics.

Navionics emphasizes that a route automatically
calculated by Autorouting does not replace safe
navigation practices and should never be your only
reference source.

The latest improvements to Dock-to-dock Autorouting
are available with the Navionics Boating app version
8.4 for iPhone and iPad. It is part of the overwhelming
value Navionics+ one year subscription package.

For more than 30 years, Navionics® has developed and manufactured
electronic navigation charts and systems for marine, inland lakes
and rivers, and outdoors use. Navionics, based in Viareggio, Italy,
operates its US headquarters in Wareham, MA, and worldwide offices in the UK, India, Australia, Estonia and Russia.