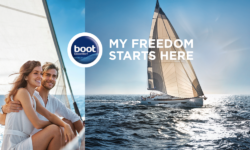 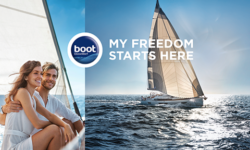 More than 100 manufacturers, sailing associations and regatta organisers will fill the sailing Halls 15 and 16 of the fair and thus show the "crème de la crème" of the industry. Sailing is, and always has been, more than just a sport. Sailing means true passion - passion you can experience for yourself in two impressive halls. Discover dinghies and sailing yachts, the latest trends and thrilling voyages. Our experts give sailing fans-in-the-making valuable tips and tricks in our new “start sailing” area whilst the little ones get ready to cast off in the boot Sailing School.

A particularly magical attraction at boot is traditionally the stage of the Sailing Center. The Sailing Center presents the whole world of sailing and offers top-class lectures by ocean sailors, regatta participants and around-the-world sailors. Expert and experience reports, excitingly narrated and prepared, will take you on a journey into the fascinating world of sailing.

The charismatic single-handed sailor and Vendée Globe participant Pip Hare sailed her way into the hearts of the fans in 2021 and will report on her further plans for 2024 at boot. Another highlight will be the live broadcast from Cape Verde to the Sailing Center in Hall 15, where Robert Stanjek will be in front of the camera directly after the first leg of The Ocean Race from Alicante to the Cape Verde Islands. The 2014 Olympic sixth place finisher has since switched to offshore sailing and is competing in a world race for the first time in The Ocean Race. Together with Jens Kuphal, Philip Kasüske, Annie Lush and Benjamin Dutreux, they are sailing as a crew on Dutreux's boat in the race on the world's oceans.

A look around the exhibition halls makes the sailing fan’s heart beat faster. Amel, Arcona Najad, Bavaria, Bénéteau, Contest, Dufour, Elan, Faurby, Grand Soleil, Hallberg Rassy, Sirena, Solaris, Sunbeam, Wauquiez, among others, are on board with their fleets and a wide range of products.

In the sailing halls, the very special flair that unites the sportsmen and women will once again be evident. Everyone is welcome here. Whether dinghies or the large yachts from Nautor's Swan, CNB and Oyster, monohulls or multihulls from Bali, Excess, Lagoon and Quorning, in Halls 15 and 16 the dream of sailing will come true.

You can try out sailing during the boot. Taking part is expressly encouraged! Of course, under expert supervision from the experienced sailing instructors at Unterbacher See. Students learn from the instructors at the boot Sailing School the first steps in dealing with sails and wind. Optimists are available for sailing on the large water basin with several wind machines.

Your dream of watersports does not have to be a leap into cold water: Our experts in the areas "Start boating - Start Sailing" in Hall 15 gladly provide practical tips and advice to all those who are interested in boating. From boating licenses to chartering yachts and suitable equipment, all your questions will be answered competently here. For free, of course! Beginners will find helpful tips from experts.
Start sailing - Start boating

Women and men, young and old, with and without handicap - all people who want to sail should also be able to sail! This is what the German Sailing Association is campaigning for at the Inclusive Sailing Day on 28 January 2023 at boot in Düsseldorf!

Our workshops - more than pure knowledge

The Blauwasser seminar promises concentrated expertise once again.
For the thirteenth time, the round-the-world sailors Judith and Sönke Roever invite you to the boot Blauwasser seminar. Where visitors can look forward to a colourful programme with exciting presentations by renowned blue-water experts. Plan your next long trip with us at boot Düsseldorf.

The boot cruise advisors look forward to interesting discussions with you. Start your next sailing holiday well prepared, participate in individual discussions, talk to experts and discover the most beautiful harbours and anchorages worldwide.

Get to know all aspects of chartering in our charter forum. From the charter contract, to insurance, to handing over the boat and the deposit. Be well prepared for your next charter tour and look forward to your trip.

The diversity of sailing at boot Düsseldorf

Travel further through our themed worlds

All themed areas of boot Düsseldorf areas at a glance.