boot 2017:
Exhibitor registration for the upcoming boot from April 2016 onwards 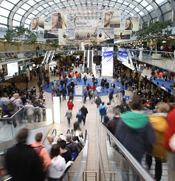 Entrance to the boot fair

“The next boot begins as soon as latest boot ends”: Petros Michelidakis is looking forward to the assignment he took over on 1. March as Director of the world’s largest water sports trade fair. Together with his team, he is working intensively on preparations for boot Düsseldorf 2017 (21. to 29. January). Michelidakis, who is a Greek native and committed water sports enthusiast, reports: “We have started all our planning for the forthcoming trade fair. And I can already say that boot 2017 will have numerous highlights to offer and will be a further milestone in the almost 50-year history of the water sports trade fair”.

The boot Düsseldorf exhibitor and marketing departments are already busy preparing the Messe Düsseldorf application documents, for example. And the trade fair organisers have set themselves an ambitious target: “We intend to make the documents available online on 21. April”, explains Project Manager Arne von Heimendahl. Companies that are interested can register for boot Düsseldorf 2017 from this date onwards.

Some of the team headed by Director Michelidakis are new as well: as Project Manager, von Heimendahl continues to be responsible for the exhibitors in the sailing and motor boat halls. Viktoria Marx has been the Project Manager for the diving, trend sports and tourism exhibitors since February, while Lena Beckmann has joined the support team for Halls 11 and 12 to focus on the equipment sector and Caroline Mühl is in charge of special shows and adventure worlds. Tania Vellen and Cathrin Imkampe took over as the international press contacts this year.

Information about registration as an exhibitor can be obtained with immediate effect via the new e-mail address bootteam@messe-duesseldorf.de. From this year onwards, exhibitors will only be able to register online via www.boot.de or www.boat-duesseldorf.com.