The cockpit of the Dufour Grand Large 360 was functionally optimized, the control colums are now detached and provide the helmsmen with considerably more moving space, facilitating better boat handling. At the stern, the cockpit ends in a dinghy garage and there is an option to integrate a wetbar with grill and sink. Last but not least, the designers enlarged the bathing platform significantly, and placed it closer to the waterline, creating an easily accessible area for relaxation.

Images of the Dufour Grand Large 360

Two or three double cabin version
The Dufour Grand Large is availabe in a two or a three double cabin version. Optionally, the double aft cabin can be replaced with two smaller double cabins, although this will result in the omission of storage in the transom seat as well as a smaller bathroom. The roomy saloon remains unaffected with its L-shaped galley and the nav station, as does the large double cabin in the bow. When configuring the Dufour Grand Large 360, the future owner may choose between moabi, oak and teak surfaces. 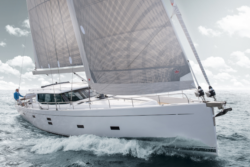