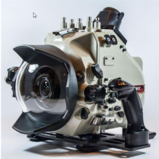 SUBAL Provides a housing for the Sony FS7Mk2. The housing is very compact and it is possible to operate all functions of the camera in the housing on manual way. Also you have electronic lanc control or infrared via electronic remote handle. The housing also has a inbuilt depths gauge. We have the Subal port system size 4. So you can use all Subal ports as we have for our DSLR housings. This gives you the possibility to use all lenses you want to use: Sony, Canon, Zeiss...

We are making all zoom gears as you need it. Also you can use our focus Extention rings, so you can zoom and focus manualy if you want.

The housing has a inbuilt Monitor (as comes with the camera) and we have a changeable magnifying viewfinder with diopter adjustment.

It is possible to install a HDSDI output for extern monitor (Odysee, Shogun…)

You also can have Air lock Vacuum Control System or a remote unit.

Now you can take wonderful photos and movies to the 60m deep with your iPhone. It is available to 6 plus, 7 plus & plus, as well as for 6, 7, 8 & 10 iPhones. Housing is made of durable plastic and it has perfect ergonomy.

In addition to the standard viewfinder, SUBAL has developed various options to meet the demands of underwater photographers. The viewfinder is one of the most important elements for improving creativity in underwater imaging.

SUBAL GS180 straight viewfinder provides 150% magnification of the camera image. The casing of the GS 180 viewfinder is manufactured from anodized sea-grade aluminum and fitted with high-quality, multi-coated optical glass which ensures the highest resolution and optimum light transmission.

A simple interchangeable system makes it possible for the user to fit, remove or change any of the SUBAL’s viewfinders whenever needed.

The new PS30 viewfinder optics offers a comfortable look in the camera's viewfinder in a 30° angel.
The PS30 has also a magnification factor of 150%,as a resul t of that / therefore   the visible viewfinder image is 2, 5 times  larger as  the one of the standard viewfinder.

Prism viewfinder optic is specially designed as advantage for macro recording directly on the bottom and for video recordings as well as half and half shots.

Full TTL-mode with the corresponding digital SLRs from Nikon. Removable synchronous cable. Supplied with 5-pin synch-cord. Adapter plate with thread M8 and 3/8 "on the bottom for connecting ball or SG-22 quick coupling. Accessories socket at the top with M6 threaded (E.g. for pilot lamp).

Push buttons for:
Access to all essential functions by pushbuttons and pushbuttons.

1952 - 1980
Inspired by diving pioneer and oceanographer Hans Hass, a tinkering 16 year old,  Arnold Stepanek, built in 1952 his first underwater housing out of rubber and glass for his Kodak Retinette camera. This he used in the streams of Steyr for his first black and white recordings. In 1954, the first underwater housing made of die-casting was made.  Then,  five years later, the first single lens reflex camera ( Edixa reflex) is installed in a housing . In 1965  the Edixa reflex gets a upgraded underwater housing with a 4x filter and Nahlinse revolver, an absolute novelty in SLR underwater photography. Local and normal shots during the same dive are possible. Other new features: Shunt for bulb flash devices , there are jacks for cable flash and Xenon Flash . This breakthrough begins the commercial production of photo and movie packages in 1969. The SUBAL Austria brand is created in 1977. In the following years the focus of  production is on housings for Super 8 film cameras, which SUBAL dominates unrivaled worldwide .

1980 - 2000
1982 CINESUB 120 was introduced for the Bolex H16 with 120 m Magazine. Two years later, UW housings are being custom made for different manufacturers. SUBAL makes the first housing and strobecase for a SLR with autofocus, the Minolta 7000). In 1992, saw the production of one of the most successful and best-selling aluminum cases for the Videosub T camcorder.  And a  year later, a housing for the Nikon N90, the MINIFLEX N9 continues SUBALs' success. In 1995 SUBAL develops a special optical viewfinder with an efficient diopter compensation.  Two years later, the revolutionary Quicklock closure system is intruduced to better protect cameras and housings. in addition to a new design, developed . In 1998, the PROCASE F5 for the Nikon F5 appears.  Rated by most professional underwater photographers worldwide at the time, as one of the best ever housings.  By 2000 The product range is extended with housings for the Nikon F60, the Canon EOS5, the Nikon F100 and the classic MINIFLEX N9 is upgraded with a new closure system.

2000 - 2011
In 2001, the new VIDEOSUB X1 appears, the only housing on the world market for the semi-professional Canon XL1 camcorder. As early as 2002 SUBAL brings out the first undewater housings for digital cameras. Simultaneously, strobecases for digital SLRs are developed. Since the widespread use of digital SLR cameras SUBAL focused on the development of appropriate housings for the professional models of camera manufactured in 2003.  The flash housing STROBECASE SN800 , for Nikon SB -800 , and STROBECASE SN55 , for the Canon Speedlite 550EX complete the package in 2004. Other housings and strobecases are built in 2005 , in addition the excellent GS viewfinder optical system is developed so that the viewfinder image is enlarged by 150%. By 2006, the answer to the rapid change of camera models, was automated production machinery .In  2007, the WS -45, a rotatable angle viewfinder with 45° viewing is created. Then the 10 '' Superdome, a dome port for super-wide- angle lenses produced the highest image quality. By 2013, with the housings for the 5DMKII, D800 and others, SUBAL offers their aluminum housing for the latest series of the compact full-frame SLR cameras from Canon, ie without restrictions in the image angle! The creativity of the underwater photographers are now without limits .

2011 - Nowadays
In 2011, the founder of SUBAL Mr. Arnold Stepanek retired, and Mr. Harald Karl took over the company. We have moved into a new home deserving of a brand like SUBAL, and we also opened a SUBAL shop in Vienna. SUBAL has started with new designs of their housings and has come back on the market with top range video housings, including the universal video housing VS1.
SUBAL has now about 40 different models of camera and video housings.

In these years we have produced camera housings for Nikon D800, D810 and Canon 5DMK III, and 5Ds. We produced video housings for the Sony FS700,  which, in combination with the Odyssey monitor housing can record in 4K mode.  We also produced a housing for the Sony FS7 camera. In 2016. SUBAL are the first to offer a underwater camera housing for the Nikon D5 and the iconic Leica M.