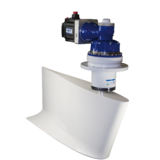 CMC Marine expands his family of stabilizer systems.
CMC Marine has launched on the market three systems that bring yachts’ stabilization to the next level.
Whatever lenght, speed and hull type yacht has now the chance to install on board a tailor made stabilizing system that will ensure amazing performances and a world of advantages.

Dualis Electra is the wide series of bow and stern thruster with electric actuator. Thanks to the new generation of electrical motors, that coupled with the up-to-date CMC Marine pod, it offers all the advantages of the electrical thrusters while volume and weight of the entire system is dramatically reduced.
Our thrusters can offer a thrust of 30% more than the comparable standard models.

Dualis Hydro is the wide series of bow and stern thruster with traditional hydraulic actuator. All thrusters feature dual counter-rotating propellers and are suitable for a wide range of uses with available power from 18 to 130 kW. They can be fitted to vessels with steel, aluminum or composite hulls starting from about 18-20 metres.

Our electrical control system has been improved so to grant faster responses, more functions and increased performances. As part of the SE Integrated System it allows a constant monitoring of both the stabilizing system and the trhusters’ performances.
Dia-Log is covered by patent n. TO2012A000472

CMC Marine was founded in 2005 with the aim to offer a new generation of control and stabilizing systems meticulously designed and built. From the beginning the Company has invested considerably in R&D, in collaboration with Italy’s best universities, with shipyards’ technical departments and with technical partners. Through the years, CMC Marine has developed several innovative products: launched in 2008, Stabilis Electra was world’s first electrically actuated stabilizing system, and was granted European Patent n° 2172394 in 2012. Since then, CMC Marine has kept investing in R&D relentlessly, releasing to the market several innovations: “Dia-Log” control software – which was granted an European patent in 2013 – followed by CMC’s unique integrated stabilizing and steering system. And a lot more is ready to be launched in the next future.

CMC Marine’s headquarters, manufacturing and engineering facilities are located in Pisa (Tuscany), but CMC Marine’s presence extends to the areas where yachts are operated through Service Network.

Today CMC Marine’s innovative products are installed on Superyachts produced by the majority of world’s leading shipyards, who have chosen to rely on CMC Marine’s quality, innovation and reliability.