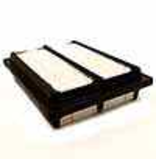 Products of the company Hengst Filterwerke, Münster, formed the basis of the program.

These were followed by well-known filter manufacturers such as:

In the seventies, first two branches were founded in Germany, later one in Austria, in order to provide a nationwide supply of goods and know-how to our customers. After the reunification another branch was founded near Leipzig, before a subsidiary in Florida, U. S. A., followed in 1995.
The increasing demands of the market have always been met progressively by adapting and completing the product range, so that today we can look back on a complete programme with over 11,000 articles in stock. True to the motto: "Everything from one source".

An expression of the increasing market demand is our own filter production, which has existed since 1982. In the year 2000, this filter production already reaches such an extent that new buildings have to be moved into. From 2000 onwards, the entire company is certified according to DIN EN ISO 9001.

About 120 employees are constantly striving to offer our customers the best possible service.