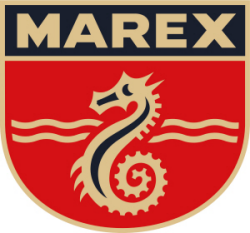 The Marex 310, the perfect cockpit cruiser for a normal sized family. The Marex 310 SC impresses with enormous space in the cockpit seating area. It features an intelligent wrap-around cockpit seating area that stretches all the way from the helm station to the passenger seat, with room for 10 people around the table. This invites you to the most enjoyable socializing with friends. Both the port and starboard sides can be used as sun loungers! Three in total. This will also allow you to invite more friends and family over for sleepovers. The entire seating area as well as the swim platform have plenty of storage compartments. The rear benches can also convert into nice seats. A perfect place to relax on sunny days.

The boat has plenty of accommodations below deck. The great sense of space is due to the enormous cabin stair door that divides the cockpit and lower deck. This allows natural light to enter the galley/ hallway area and greatly increase the feeling of space. In the forward cabin, the large hull windows ensure that the cabin gets plenty of light and a great view. A perfect view to wake up to. The middle cabin has a double insert, neat wardrobe and space to change next to the bed. We have also placed a large hull window in front of the bed in this cabin. Between the two cabins is an incredibly spacious and well equipped bathroom.

The cockpit is safe, inviting and protected by two sunroofs and the world's fastest soft top system. It closes by pulling the top from the side vertical lockers around the cockpit like a curtain. This extremely flexible solution allows the canopy to be set up in a matter of seconds. The boat has a two-person driver's seat forward of the dashboard and a single seat on the starboard side. This means there is room for three people looking forward when you are underway.

e 373 is a boat for a large family. It has timeless classic lines and includes a large stern cabin. The boat is powered by a single engine with a straight shaft - it is easy to move around in the 37 foot boat thanks to the lowered side deck and easy passage to the swim platform. Marex has given the boat a "small ship" character and look. In the very spacious stern cabin, which offers standing height, you will find a single and a double bed. The rear cabin has a panoramic view through the window that goes all around the stern structure. The forward cabin have a double bed and an additional single bed is placed in the middle of the boat. This space serves as a perfect storage room when not in use. The separate toilet and the independent bathroom are placed in the middle of the boat. The Marex 373 ACC can accommodate a large seated group for up to 19 people. Part of the seating also serves as a co-pilot seat for two, an important detail for passengers. Adjacent to the large dining table, the chic bar chairs are a first on the craft of this size and are very practical, especially for the boss. The canopy system is simple and resembles the latest baby carriers in design and ease of use. When folded, the canopy is well hidden around the rear of the sunbed cushions. The 373 is the embellished version of the 370 ACC.

The new Marex 375 is based on the same design as the award-winning Marex 370 ACC. The basic idea was to focus on the space above the deck. We have made room for two large seating areas in the boat. The focus is that today's customers want to stay up top and not have a seating area below deck. Marex has also tried to give the boat a yacht feel in the bow design and with the wide side deck. The seaworthiness of the Marex 375 will be as good as the 370 ACC. There is a planning hull built for single or twin engines with gearbox or shaft.

More than four decades have passed since the first Marex boat was launched in Norway. The Marex shipyard was founded in 1973 in Grimstad, a small town on the south coast of Norway. The founder and managing director of Marex for over 20 years was Eyvin Aalrud. The Marex shipyard quickly became a success thanks to Eyvin Aalrud's foresight. During this time Marex has remained a family business, gradually becoming one of the most consistent European boat manufacturers in a very unpredictable business. Today the company is managed and run by his two sons Espen and Thomas. Both sons have been rooted in the boat industry since birth and have been driven by immense passion for boats and family business since taking over in 1989. This has been achieved through excellent leadership and consistent investment in advanced boat building techniques. Today Marex boats are stronger and bigger than ever and they are renowned throughout Europe for their quality, durability and resilience. The proof of this is all the prizes and awards Marex have won over the last decade at both national and international level.